Today, the random vinyl pick from my singles collection is Michael Penn's "This and That", from 1990. 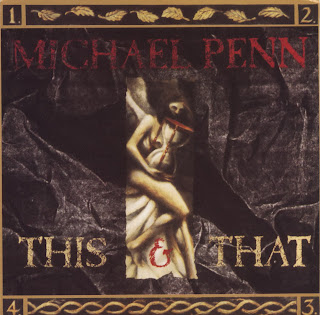 Michael Penn is Sean Penn's brother. (They also have another actor brother, Chris Penn, who was in Footloose.) Michael penn writes the most beautiful melodies and lyrics. He is a clever and romantic soul. I also have his single called "No Myth"which was an even bigger hit. He had one more album that I know of, and then, I'm not sure what happened to him...Must look him up on the net. Okay, I'm back from my search. Michael Penn has had 5 albums and has created original music for tons of films over the years. I was surprised to find out that he is married to Aimee Mann, who is also a brilliant singer/songwriter/musician. I love her work in the band, Til Tuesday, although she has an intense face that scares me a bit!

Check out these three songs:

No Myth (His eyes are captivating in this one!)

@ Yahoo! Video
And my favourite Til Tuesday song, (Believed You Were) Lucky.

Some things I have wanted for a long time

Aaah, I finally have them! Two black Hemnes bedsides from Ikea. Simple, elegant. And I put them together myself! Oh the joy! 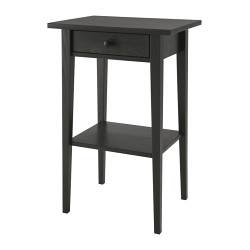 Here they are in action in their new home. Yay! 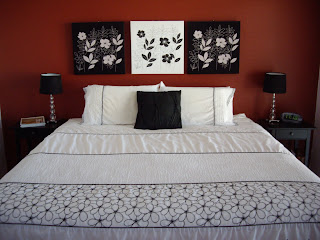 Labels: decorating, Ikea Links to this post
Posted by Beautiful Day 3 comments: at 15:49 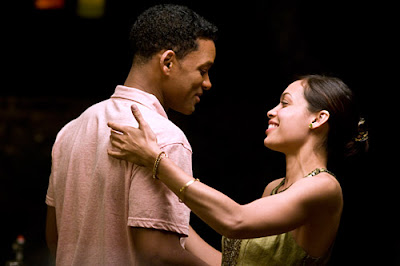 For those of you who can handle a quiet, thought-provoking romantic film that makes you bawl and bawl, hire Seven Pounds, starring Will Smith and Rosario Dawson. Check out my review at A Choc Top and Me - it is an amazing story!
Labels: films Links to this post
Posted by Beautiful Day 1 comment: at 00:53

In the 90s I was a great collector of vinyl records. For fun, I thought I would choose one record randomly, every now and then, and share the story that goes with it.
Today's random pick from my singles collection is "The Unguarded Moment" by The Church. 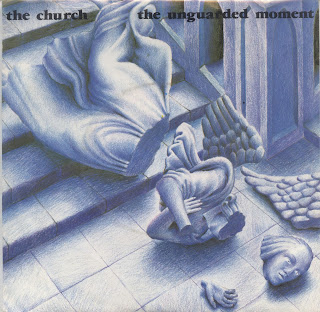 An Australian band, I remember this song when it was released in the early 80s (and played on Countdown, a favourite Aussie music show on tele), and I was intrigued by the lead singer's deep voice. Little did I know that years later, when they released the album, Gold Afternoon Fix, I would become their biggest fan and collect their entire back catalogue, including rare singles costing $90 or more! I also bought all the releases by the individual band members, and particularly fell for the poetic, folky style of the guitarist, Marty Willson-Piper (who was a stunner in his day, but now sports a ZZ Top beard!)  I also bought all the releases of their girlfriends, wives, and brothers, and went to many of their gigs when they played in Perth. I even had the chance to meet them once, and I remember them all being very tall, slim and handsome! Their music is mostly dark, moody, and melodic, with many memorable guitar riffs and poetic lyrics. They still release CDs every couple of years or so.
Watch the vid here:

That video is ancient!! Do you remember the song now? I adore it!
Labels: random vinyl pick Links to this post
Posted by Beautiful Day 1 comment: at 16:48

Went to Angus and Robertson yesterday to buy a present, and came home with the present, and two books for myself!  I grabbed their top 100 list and was surprised to find I have only read 23 of the books voted for by the Australian public. 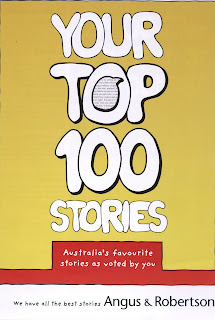 Funnily enough, I have 10 other books on the list on my shelves just waiting to be read! So, while I know I will still grab books that I'm interested in, I'm going to attempt to read ALL of the books on this list throughout the next two years.  At my rate of about one per week, I just might be able to do that. Check out my reviews at Wise Owl Books to see my progress. 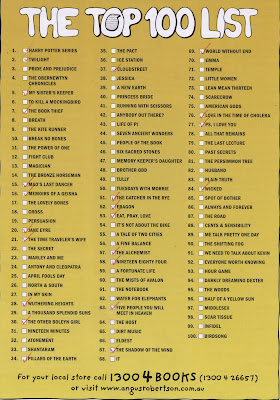 Labels: books, shopping Links to this post
Posted by Beautiful Day 4 comments: at 15:18

What fun it is to shop on etsy! As part of my continuing-to-get-organised-resolution, I decided that this year for the first time EVER, I would shop for Christmas presents throughout the year instead of in the last week! And I'm going to try to shop for as many things as possible on line. Recently I received some of this Christmas shopping in the mail from two etsy shops I absolutely love! Here are some tea towels from Teresa Sheeley. Gorgeous!! 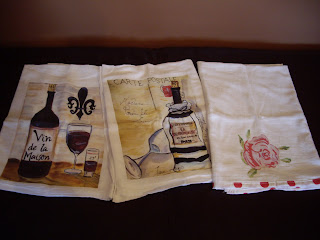 You have to see these tea towels to be taken aback by the lovely texture of the cloth, and the amazing artistry of this lovely lady, who has a wonderful shop here, and an inspiring blog here.

I also bought some stunning jewellery from Lora Stone at ValentineStudios.Etsy.com 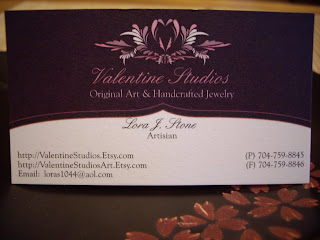 I actually bought these for me (the only downfall of shopping for others, is finding heaps of gorgeous stuff for yourself!!) and they are exquisite, and yet surprisingly affordable. 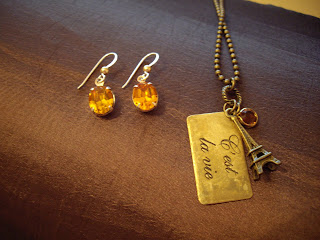 Look at the colours of the stones, and that adorable Eiffel Tower!

And there was even a heart pendant made from a coin! How sweet and clever! 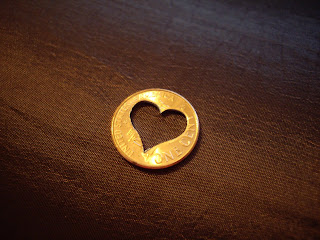 LOVE!
Labels: jewellery, shopping Links to this post
Posted by Beautiful Day No comments: at 23:42

Blog awards all round 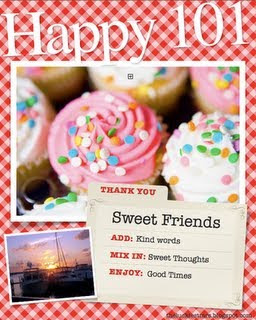 A little while ago, Jessica from JessicaLeighLaLou gave me this award on the condition that I tell you 10 things that make me happy, so here they are:

1. Books, books and more books
2. Blogs
3. Magazines
4. Movies
5. Peppermint Tea
6. Cake
7. Colours
8. Pretty papers
9. Funny children
10. Good times with family and friends
There are heaps more of course, but these were the first ones to come to mind!
You, too, can add this award to your sidebar if you name your own ten things that make you happy!
Labels: blog challenges Links to this post
Posted by Beautiful Day No comments: at 00:21

I'm in love with these dolls!

Sorry I've been missing in action this week, but I'm back at work and it is all encompassing! The new Kindy kids are absolutely cute as usual, and we're having a fun time!

I have been checking my daily etsy find emails and today I came upon these magnificent artworks by a team called cartbeforethehorse. You know how much I love fairy tales, particularly Alice in Wonderland? Well look what these amazing people have created: 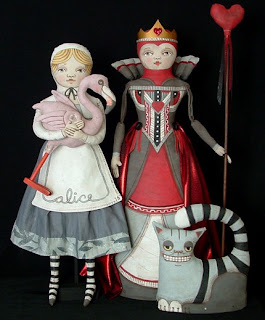 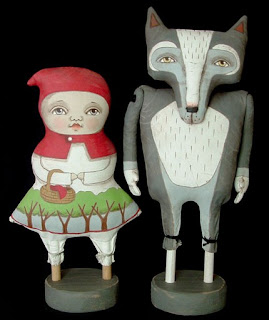 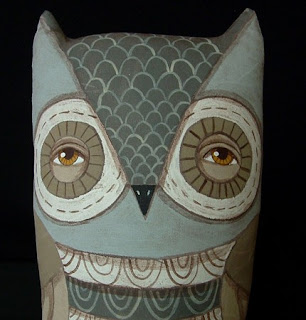 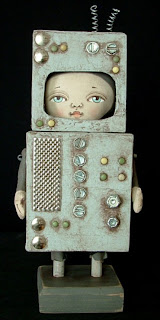 The eyes! Wow, they take my breath away! There are many more dolls and quilt patterns to drool over. Check them out here and at their blog here. (Whoops! the links were wrong...I've fixed them!)
Labels: etsy Links to this post
Posted by Beautiful Day 1 comment: at 14:29